While Huawei is plunging under pressure from US sanctions, Apple’s strategy to remain an exclusive, premium brand and the slow pace at which new innovations are added to i-Family products has left rival Samsung in a favorable position for expansion into the European market. The South Korean company had reached more than 40% market share by mid-2019.

With 18.3 million devices delivered and an annual sales increase estimated at 20%, Samsung dominates the European smartphone market without any doubt.

The next one – Huawei – has less than half of the volume of deliveries announced by South Koreans. 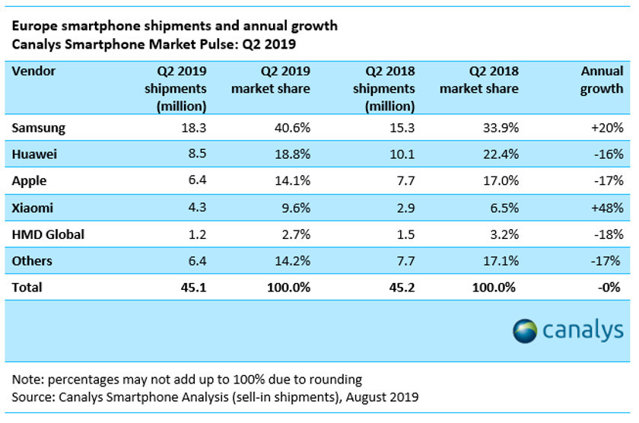 With 6.4 million units shipped in Q2-2019, Apple would easily fall into the “other manufacturers” category if we didn’t take into account the previous year-to-year revenue made by the US company.

While many Samsung entry-level phones are included in the Samsung offer, in the case of Apple we only have premium phones with prices ranging up to several times higher per unit sold.

In terms of Samsung sales division, the Galaxy A10, A20e, A40, and A50 series are responsible for more units delivered than any other rival manufacturer, even considering the entire smartphone portfolio.

But the very good results achieved by Samsung are not exclusively due to the excellent sales of the budget phones. The trade sanctions imposed on Huawei by the Trump administration have a significant impact too.