The magnetic field of our planet is responsible for blocking a large amount of the solar radiation out of the Earth, which could lead to the total disappearance of the planet’s atmosphere and ocean. In turn, this can lead to the extinction of life on Earth.

Data collected over the last century has led scientists to conclude that the magnetic north pole is in motion, moving towards the geographic north at a speed of approximately 48 kilometers per year. This discovery has two major implications: 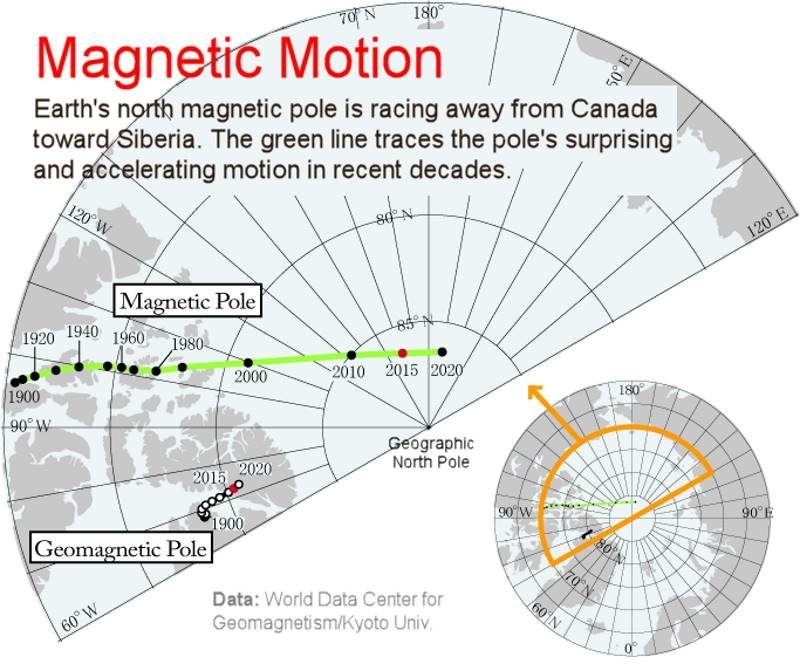 Until recently, detecting and approximating changes in the magnetic field was an impossible task for scientists. Geophysicists Julien Aubert and Christopher Finlay took steps to determine variations by using supercomputers, Science Alert notes. The two started from the premise that the movement of the liquid metal masses influences the state of the magnetic field and, later, they learned that some anomalies occur in the core of the planet. These anomalies occur as a result of the existence of liquid metal masses which rise in contact with the cooler liquid metal. These waves give rise to magnetic waves that influence the position of the magnetic north pole. “Think of these waves vibrating in a similar way to the strings of a musical instrument,” said Julien Aubert, one of the authors of the recently published research in Nature.

The importance of magnetic north in navigation

For the armed forces of the United States or those of the European countries, the exact determination of the magnetic north is of the utmost importance, on which their navigation systems depend. Also, the existence of a precise World Magnetic Model is a priority for civilian users, airlines and even applications that use GPS location, without which navigation is much more difficult. For this reason, the British Geological Survey and the National Oceanic and Atmospheric Administration are responsible for updating WMM every five years.

Is it possible to disintegrate the magnetic field?

The Earth’s magnetic field keeps solar radiation away and protects the atmosphere from evaporation, in the absence of which, we could be left without an atmosphere. However, the possibility of our planet to be stripped off the magnetic cover is very small, due to the fact that the planet’s core will always be in constant motion, said Justin Revenaugh, a seismologist at the University of Minnesota.

A very unlikely case proposed by the seismologist involves the reversal of the magnetic poles. In such a case, the magnetic field will lose up to one-third of the density.