A recent study by the University of Maryland (UMD) in the US found that a common chemical can reverse the symptoms of progeria (the disease of premature aging) or even normal aging.

According to the study, low doses of methylene blue can counteract the damage to cells made by the genetic stimulatory effect of progeria. The beneficial effects of methylene blue occur with speed and reliability that scientists consider “magical”.

Aging begins at about 2 years of age, and at 10-12 years of age, the child has all the external characteristics of aging, for example, gray hair, baldness, lack of fat inside the body. Degenerative changes also occur within the body, for example, atherosclerosis. Very few children affected by this serious disease, which causes rapid aging, reach the age of 13.

Progeria is caused by the defect of the gene responsible for the production of the lamin A protein, which is part of the cell nucleus and the nuclear membrane. According to the UMD team, healthy cells receive only a small portion of the lamin A molecule, which does not allow them to function normally. In the case of progeria, the nuclear membrane of the molecules remains unchanged until it begins to become inflamed and deformed. 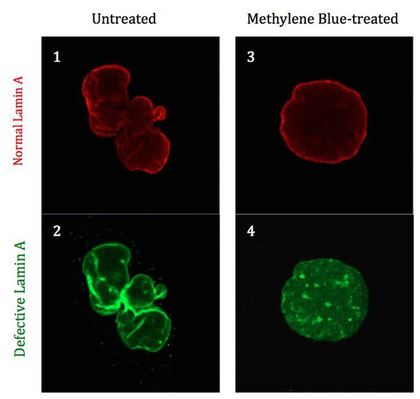 The UMD team observed that progeria affects the mitochondria, which are the cell’s thrusters, stimulating them to become inflamed, fragmented, and to have other defects. It was amazing when scientists noticed that the symptoms of progeria can be reversed in less than 8 weeks with the help of methylene blue.

Methyl blue was manufactured for the first time in 1876. It has been used as an antibacterial solution for the treatment of wounds caused by psoriasis and other diseases, in cases of cyanide poisoning, and even to clean aquariums, because its toxicity is so high.

Working with human fibroblast cells, the team discovered that methylene blue modified the cells affected by progeria, giving them the initial, normal, round shape in one week and managed to repair them almost completely within 8 weeks.

“So far, I’ve only worked with stem cells. It is essential to see if the effect will be the same in live animals. We also want to see if methylene blue can repair the specific effects of progeria in different cell types, such as bone, skin, cardiovascular cells, and others. In addition, some teams will begin clinical studies on human cells,” says Kan Cao, professor of cell biology and molecular genetics at the University of Maryland and author of the study.