It will take a while until Galaxy Fold and Mate X, the foldable phones from Samsung and Huawei, will be made available to the general public.

Rumors have already begun to emerge about the next generations of flexible-screen devices. Samsung’s next model could approach the design even more “bold” than the Galaxy Fold. The new design concepts registered by the company reveal a model with a “slider” system, which folds in half.

This Samsung model could also be integrated into the “Fold” family. Instead of holding the foldable screen inside, it seems to position it on the outside, offering new features that emerge from the new format. For example, when the phone is folded in half, it may remain closed. The full opening may display content on the screen while folding in other forms, depending on the size of the external display. Thus, it may adapt the content and applications to the new format.

This “Galaxy Fold 2” could benefit from other new capabilities. For example, this might be the first foldable screen smartphone that uses glass instead of a plastic shield. Using this material would provide better reliability over time and better protection against shocks and scratches for the new device. The Galaxy Fold 1’s test units have proven that the plastic film scratches very easily, while its removal leads to the distortion of the foldable screen. 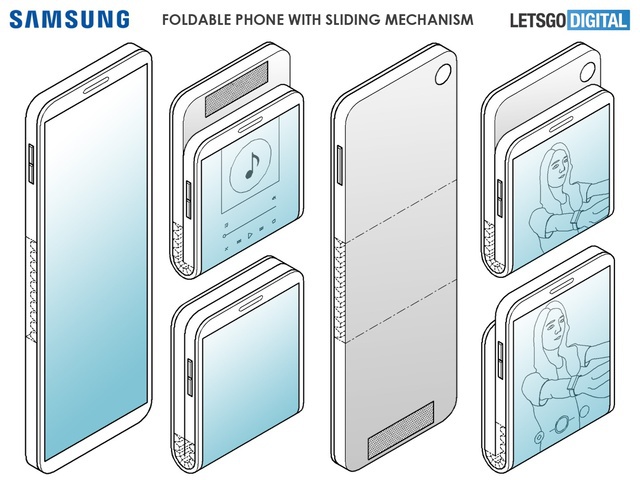 According to the latest information, Samsung will not use glass from Corning, as it will not be ready in time for such a device. In contrast, DoInsys, a South Korean company, could offer UTG (Ultra-Thin Glass) glass, which can be bent so that it does not break and provide the necessary protection for such a device. Mass production of the DoInsys thin glass plant should start in 2020. This is a timely moment, given that the first Galaxy Fold is launched in 2019, and the second generation could come in 6-12 months. distance.

Of course, all this information is currently unconfirmed. The phone may look completely different once it hits the market compared to the leaked images, but Samsung will certainly invest more resources in developing new foldable-screen phones in the future. The news that there are already solutions to fix one of the biggest shortcomings of this category of devices can only delight us.